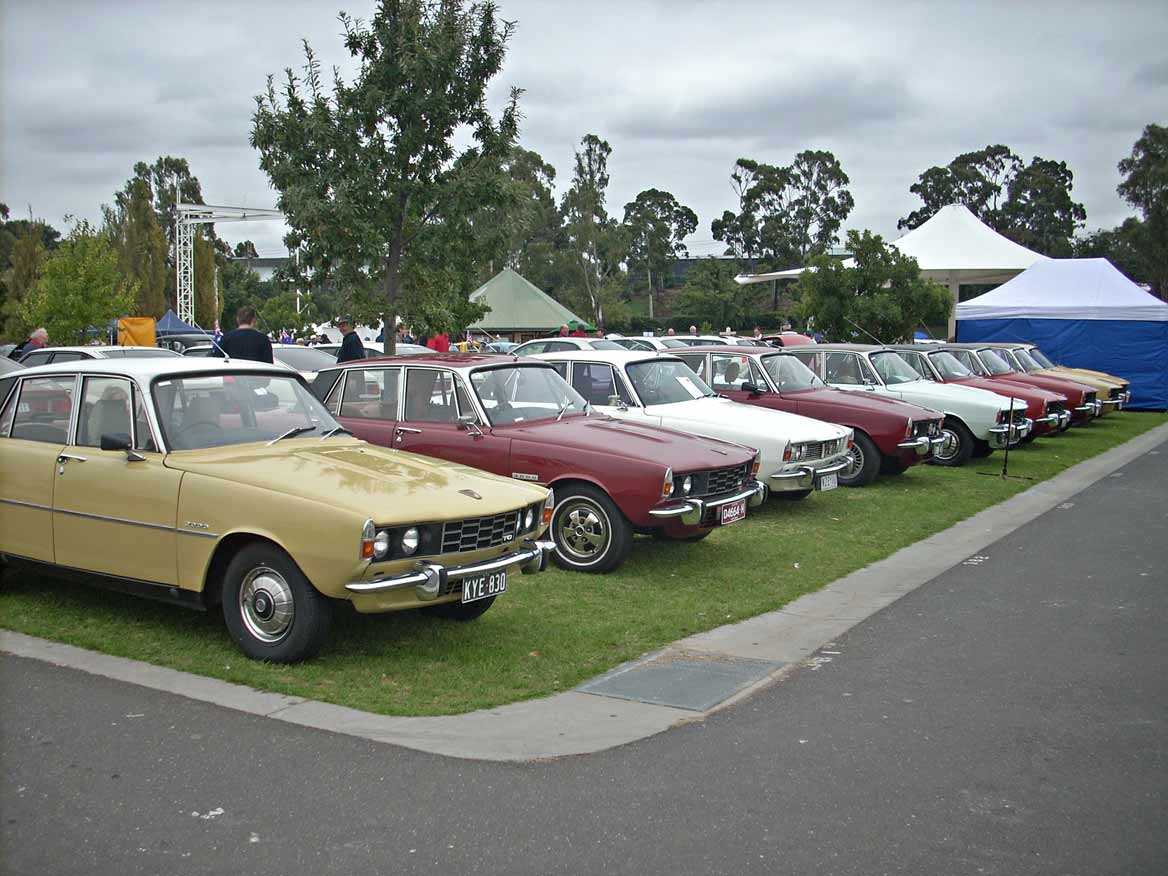 2023 will be the 60th anniversary of the introduction of the Rover P6 2000 (4 cyl) in 1963. Over a period of 14 years over 330,000 vehicles in various guises were produced, making it the then largest volume production Rover model. The last P6 came off the production line in March 1977. The following piece was written by Ian Littler for the 50th anniversary. Ian was custodian of the wonderful Series 1 TC below.

By the early sixties, a new class of buyer had emerged – the young executive – and Rovers new P6 model, introduced in 1963, was ideally placed to exploit this new market. The Rover Company was also ahead of other companies in the introduction of a 2 litre model. By combining the traditional Rover attributes in a stylish and modern package, it was hoped to develop Rover brand loyalty among a younger generation of British people.

The new car was a completely new design, and embodied no parts from other Rovers. That Rover had got it absolutely right was plain on the introduction in 1963, when motoring journalists were lost for superlatives to describe the brilliance of the design and construction of the car.

The car is constructed on a massively strong “base unit”, to which the external panels are bolted. The car can in fact be driven with no body panels fitted. The front suspension is a modified Macpherson strut design, with the springs bearing upon the front bulkhead in order to achieve a very low front wing line. The rear suspension is independent by de Dion tube with inboard disc brakes. The suspension strikes a fine balance between handling and ride comfort. The inherent strength and passive safety of the design meant that it was easily able to achieve compliance with the new regulations that were introduced in the United States.

Twin carburettor and automatic models were introduced in 1967. Also at this time Rover had purchased a discontinued Buick 3.5 litre V8 with a view to giving the big P5 model (often referred to as the “poor man’s Rolls Royce”) improved performance. It was discovered that, with a small amount of modification, this engine could be fitted in the P6. From 1968 the P6 could also be had as a P6B, the “B” signifying the origins of the engine. This model became known as “the business man’s express”.

In 1973 the 2 litre engines were increased in capacity to 2200cc. The 2200 models were not imported into Australia by Rover. Post 1972 the Rover Company in Australia concentrated on the P6B 3500 model, which was then manufactured in New Zealand from CKD kits, and thus easily imported into Australia (see example below). However, during this time there were also a number of privately imported P6 2200s brought into Australia. (See this 1976 2200 Club Member’s car)

A little over 330,000 P6 vehicles were produced according to official Rover production figures.

For a Comprehensive description of the Series 1 & 2 P6’s see the Rover P6 Australia site here.

The car was ordered by a resident of Benalla through the local agent Cooper and Mallows, in 1969. It left the factory in UK on 8th May 1969. The new owner, being a meticulous man, didn’t want just anyone driving his new car to Benalla, so he travelled to Melbourne and picked it up from Regent Motors with just 30 miles on the odometer. He owned the car for the next 29 years, but only for the first two years was it his only car.

The original owner also carried out various sympathetic modifications, including sports steering wheel, Lucas driving lights and fog lights, giving this car a quite distinctive frontal appearance and in 1978 Rostyle wheels from Stanley Phelps in England, which again contribute to the distinctiveness of this car.

The RCCA member who was the next owner was fortunate to be able to purchase the car when it was advertised for sale in 1998, having known the car through the RCCA for more than ten years. When purchased, the car had 129,000 miles on the odometer, it had rarely if ever been driven on a gravel road or parked in the sun, the car bore very few marks of its age and mileage.

The tradition of care and attention lavished on the car by the original owner was continued. At the time of this article, the car has covered 172,000 miles. It has towed a small caravan from Melbourne to Perth for the National Rove in 2004. However it is still essentially entirely original, so that it gives one a very good idea of what these cars were like in the 1960s. It still has its original baked enamel paintwork (Zircon Blue), together with its original Connolly leather trim and Wilton carpets.

This 2000TC bears few marks of its 44 years and 172,000 miles. It still offers safe, reliable and comfortable travel. There is every indication that it will continue to do so for many years to come.

(Needless to say the car has won many RCCA Concours and Display Awards over the years.)

Addendum: Since this was written the car’s ownership moved on to a Rover Owners Club NSW enthusiast, on his passing the ownership moved to a member of  Thoroughbred Car Club NSW.

This car, a 1976 New Zealand Build P6B (3500 V8) was bought almost new in Melbourne and first registered in 1977. It had been sitting in the showroom for the best part of a year having been reserved for the dealer’s son who then decided that he didn’t want it. The car accompanied the then owner to Tasmania to reside on the North West Coast and has spent most of its life in Tasmania (up to the time of writing).

It was the owner’s pride and joy for many years, however on reaching his 90’s he found the car too difficult to handle and kept it in storage for several years. He then gave the car to his granddaughter hoping she would keep it but, reluctantly, she and her husband traded the car on a van they needed for their business.

The car was spotted by one of our Tasmanian Rover group members sitting in the Launceston yard of the dealer who had traded it.

The estimated number of kilometres it had travelled was 240,000 having done two trips to Queensland towing a caravan, amongst other trips.

After buying the car Greg got in touch with the family of the former owner, and was able to go and pick up spares that also had been kept for the car including a bonnet, three front guards, a bumper and various sundries.

The car was assembled in New Zealand during the period of Free Trade agreement between Australia and New Zealand, some 1,800* Complete Knocked Down P6Bs from UK were assembled in Nelson NZ and exported to Australia. Under the FTA as much “local content” was used in Rover assembly. So, this car has a non UK production body colour, French Blue, which was also used by Nelson plant for a number of other British Leyland cars assembled at that time, including Triumph Stags and Jaguar XJ6.

Since buying the car, the steering idler has been replaced and it has had a wheel alignment. In the process of the wheel alignment a buckle in the front driving side wheel was identified and now fixed. Greg is gradually ticking things off the list that he wishes to get done.

Since buying the car, the son of the former owner has found and passed on the Owner’s Manual, the Passport to Service, the Warranty Identification Certificate.

The car was supplied by Regent Motors, but bought through Fiske’s of Box Hill. The big surprise is the delivery date – 12 May 1981. The car had sat around in the showroom for quite a while.

The following information has been supplied by a member about Regent Motors at the time:

Regent Motors had a large building in South Melbourne – the industrial type with a saw- tooth roofline, the verticals glazed.- in which they stored a “fleet” of the last of the New Zealand P6Bs. Regents made a bulk purchase when the New Zealand plant was about to cease assembling the P6Bs.

Freeway Car Radio of Malvern had the contract to fit air conditioning and radios to these vehicles. Both knee bins had to be removed from the car. They had fashioned templates for this job and narrowed the width of the bins to give space for the air conditioning. If you were to open the knee bins, you would see the cut in the plastic base. A strip of plastic, about an inch or two wide, was removed to allow the additional space for the air con controls on the fascia.

Here is an advertisement for Regent Motors from 1978. Advert courtesy of http://roverp6baustralia.com/

Interestingly it is a year after P6 production finished, the replacement SD1 3500 was also being sold.

1970 Rover P6 B “Glass Top” – One of 16 (estimated ?) cars with Triplex glass roof. This P6B also with a “Continental” Boot Kit. The car came off the production line 21 August 1970 and was sent to Regent Motors in Melbourne as an export car. It was registered as a 1971 model (or may have not been registered until 1971). The car now has Mk 2 red seats and door trims; the engine is a replacement high compression Suffix ‘C’ model as was the original, lower numbered, engine; the gearbox is from a Leyland P76 (the car did not have an engine or gearbox when purchased).

The Triplex Glass Roof was an “approved” option available on Rover P6 2000 and P6B 3500 in early 1970s. It was a joint development between Rover, Triplex and Roof Installations Ltd. The roof conversion was also available for existing P6s through Roof Installations. It was never a popular option and not many were converted, and consequently not many remain.

The car is the only known complete car in Australia and one of the few remaining World wide. (Although there was a roof in parts that was around a few years ago, it’s current existence is unconfirmed).